Sometimes, you just need to transport your motorcycle directly without driving it. There’s a common misconception that you can simply pick it up and toss it in the back of a Ute, but that’s actually far from the case. The best way to do that is by utilising motorcycle ramps, but choosing the right one can be a bit tricky. Fortunately, I’ve prepared a guide on how to choose the right one so that you’d be able to transport your motorcycle as easily and as quickly as possible. Just make sure you don’t forget to cover it with the appropriate protective gear when you’re transporting the motorcycle.

This type of ramp is usually one of the first ramps you’ll most likely come across. They’re incredibly portable and very easy to fold up to stow in the back of your Ute, as the name implies, so that when you’ll need you’ll have easy access to it. The main thing you should know is that a folding motorcycle ramp is all about convenience, as you can easily find one that collapses either two-fold or three-fold. Make sure that you’ve propped the three-fold one on your tailgate first and gently unfold it afterwards. Otherwise, you might risk some light damage to your vehicles. 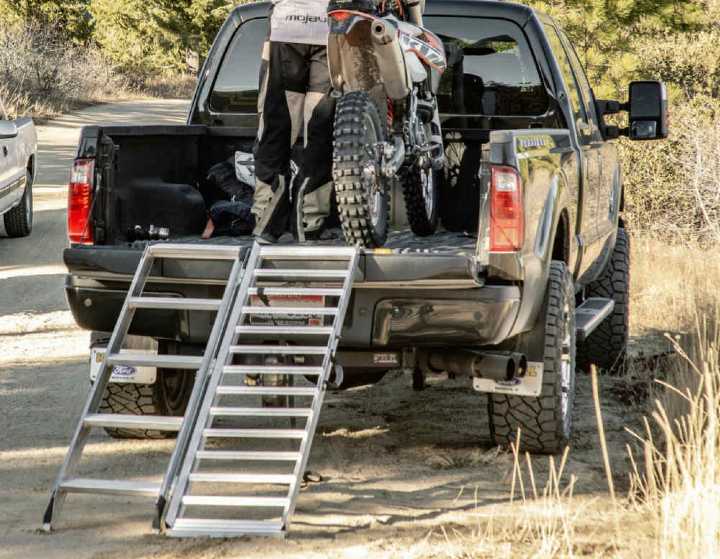 Ramp length always plays a vital role when it comes to choosing the right motorcycle ramp. The main thing is that short ramps typically come with a steep incline, and they’re used in situations where you might not have a lot of lead-up. However, even though short ramps have a harsher loading angle, that doesn’t mean they’re significantly better at higher loading heights. They’re best used on low clearance vehicles, such as trailers. Long ramps are the opposite, where you have more than enough length to accommodate taller vehicles, but the downside is that they take up a lot of space.

Straight ramps are usually correlated with longer ramps because there’s a significant overlap between them. Sometimes when you’re looking to buy motorcycle ramps, they might be sold as the exact same thing. When it comes to the arched ramp, however, there’s a slight difference. They’re mainly used for heavier motorcycles with lower ground clearance so that you can avoid potentially damaging your vehicle as the motorcycle clears one surface and boards the next. That’s because there’s typically an angle somewhere between 20 to 30 degrees, but they can also take up a lot of space as they’re not foldable like the folding motorcycle ramp.

Plate ramps typically come with a textured surface in order to increase their traction and grip. They provide great footing, both for the bike itself and for the walk-ups, because they’re quite sturdy and will be able to withstand greater weights. However, the downside is that they’re bulky and heavy, and not very wieldy, so they’ll take up a lot of space and time to set up. They can also attract a lot of debris and are not easy to clean. Rung-styled ramps come with rungs that allow debris to be easily cleared, but unlike plate ramps, they’re lighter and can feel flimsy. To avoid movement, they can be tied down, but it might be a hassle to some.

Single-runner ramps are perfect for lighter and smaller motorcycles, such as the dirt bike or the motocross, and in some cases, light cruisers and street bikes. They’re not meant for you to ride your bike on them because there isn’t enough space, so you’ll have to walk the bike up. They can also fold and are quite easy and lightweight to store. Full-width ramps are the opposite because they’re meant for you to drive your bike up on them, so they’re great for heavy bikes. Some models can even be folded, but they’re generally heavier than the single-runner ramps. 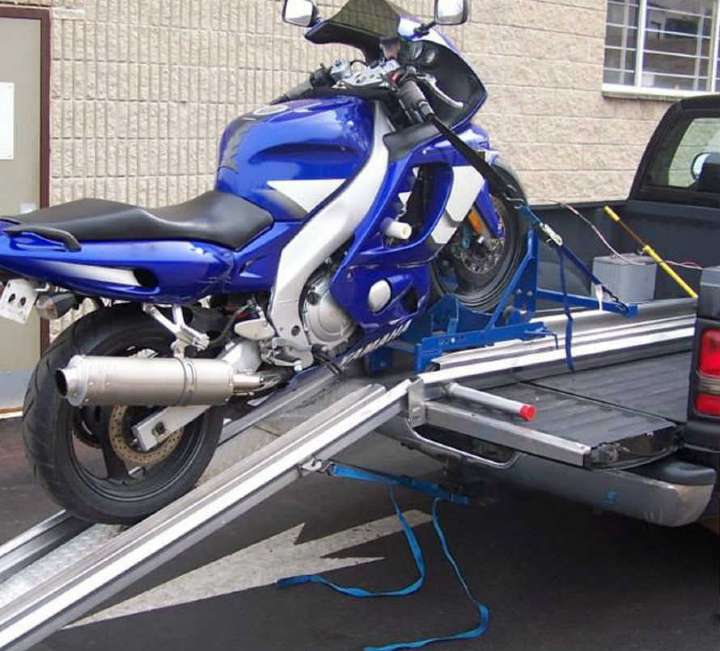 Two of the greatest advantages to aluminium is its low weight and durability, which is why it’s an ideal metal for a ramp. It’s so durable that it can withstand even the harshest conditions, and it’s often the most used metal for motorcycle ramps. On the other hand, steel is even more durable and more affordable, but it’s a bit bulkier too. The downside is that it’s prone to corrosion, but that’s why most steel ramps are coated with powder for protection.

Consider Frequency of Use

If you rarely load your motorcycle, then all you might be a ramp that folds in half so that you can maximise storage capacity. However, if you have a heavier bike that you load more often, then you should definitely consider something like the plate ramp. How often you use the ramp, as well as the type of motorcycle you have, will play a vital role in what type of ramp you get, so that’s the first thing you should think about.

Motorcycle ramps can be incredibly useful, especially if you prefer to just transport your bike someplace else first. Always make sure you understand what is it exactly that you need so that you’ll be able to safely transport your bike without damaging your vehicle.